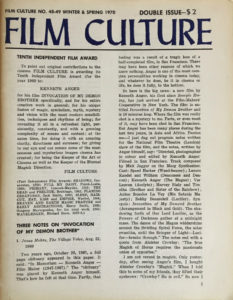 4. The Cosmic Cinema of Jordan Belson, by Gene Youngblood

6. A Note on “The Count of Days,” a Film by Robert Beavers, by Tom S. Chomont

10. “The Future Is Not What It Used to Be,” by Stan Vanderbeek

12. A Letter to Lenny Lipton, by Stan Vanderbeek

13. The Synthesis of Artificial Movements in Motion Picture Projection, by Alexander Alexieff

15. The Social Gospel of St. Jean-Luc Godard, by Dan Isaac

18. Some Recent Bergman, by Kirk Bond

19. An Interview about Georges Melies, by Maxine Haleff

20. The Art Film in India. Report on Mrinal Sen, by Forrest Williams

24. The Art of Moving Photography. A reprint from The Photographic Times, October, 1897

The only monthly magazine devoted exclusively to reviews of independent — avantgarde/student/experimental/underground — films. The only place to find out about the films that aren’t being reviewed elsewhere, or find reviews from other parts of the country that you’re not likely to come across otherwise. In addition: Interviews with filmmakers, the Cinescene Calendar (complete listings of independent film showings all over the country), and complete rental information on all films reviewed.

From fifteen years of FILM CULTURE (issue 1 to 48) P. Adams Sitney has selected fourty articles which represent the evolution of the magazine from its initial period (exemplified by the writings of Andrew Sarris, Carl Dreyer, Herman Weinberg, Hans Richter, etc.) through its involvement with the New American Cinema.

Special features: The READER reprints several articles from the von Stroheim issue (No. 18)
a large portion of the first American avantgarde film issue (No. 29) which has long been out of print
and the complete supplement of Dziga Vertov’s writings (No. 3)