The third annual New York Film Festival Downtown was once again organized and presented by filmmakers Tessa Hughes-Freeland and Ela Troyano in 1986.

In the festival's program notes, the pair continued to bemoan the lack of attention given to Lower East Side filmmakers in their own city.

ISM ISM is a documentary chronicling director Manuel DeLanda's own graffiti work. He focuses on his collage manipulation of public advertisements -- primarily cigarette ads -- as well as spray-painted philosophical text. The film was shot in Super 8mm and blown up to 16mm.

A man and a woman in their thirties, who are both married to other people, meet randomly at a Texas roadside motel and consider embarking on an affair together after both reveal how dissatisfied they’ve become with their lives.

1945: Maya Deren Wins Honorable Mention For Meshes Of The Afternoon 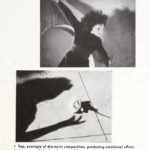 In 1945, Maya Deren was awarded an Honorable Mention for her first film, Meshes of the Afternoon (1943), by the Amateur Cinema League. This film, co-directed with her husband Alexander Hammid, would go on to become one of the most influential avant-garde films of the 20th Century.