Why Underground Film Blogging Is Important 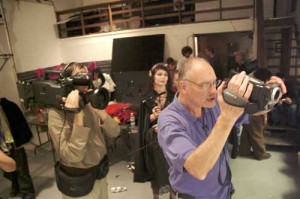 I ran across two links the other day that really reminded me of why I feel that writing about and sharing underground film on the Internet is absolutely essential — both within the confines of the limited film blogosphere and outside with real world consequences.

The first link was for a review of Jennifer M. Kroot’s It Came From Kuchar on the mainstream movie review website Bob and Jason. The documentary about underground filmmaking twin brothers George and Mike Kuchar has been reviewed on numerous film websites the past couple months since it’s small theatrical run and availability for streaming online.

Most of those sites are about independent film and are at least underground film friendly, but it’s really insightful to read the reviews on the non-underground-familiar sites. Some of them have been quite hostile, not to the documentary itself — most reviewers seem to dig it — but to the Kuchar’s brand of low-budget filmmaking, which is heavily excerpted in the film. Bob, of Bob and Jason’s review site, is not one of those overtly hostile ones, but I found his brief comments curious.

While giving It Came From Kuchar the highest marks he could, he says specifically of the Kuchars’ work: “Most of these films I would probably hate and walk out of if shown in a theater.” Why, though? What’s to “hate”?

The answer, for me anyway, came from another website on a different subject. It was a guest post on The Workbook Project written by Jessica King, who teaches film literacy to high school students, particularly those living in ethnically diverse, low-income, inner-city neighborhoods in Chicago.

King notes that the films that most of these kids are exposed to before taking her class are mainstream Hollywood fare that all star, for the most part, Caucasians. She makes special note that that isn’t meant as a political statement, just a fact. Then, she continues:

most of my students rarely, if ever, are exposed to films that feature characters whose appearance or lives in any way resemble their own. As a result, they believe that movies are not meant to represent them and, on a deeper level, that they are not meant to be represented.

However, I think that’s true of general film audiences, both Caucasian and not. As one of my English professors, the brilliant Sam Abrams at RIT, once said — and I’m paraphrasing because this was a long time ago: “The world is divided up into two kinds of people: People who have wonderful, fun and exciting adventures and the people who sit on their ass in front of a TV watching them have those wonderful, fun and exciting adventures.”

If mainstream Hollywood fare has taught the world anything, it’s that films have to have a specific level of slick, technical expertise. And movies that don’t meet those high technical expectations … well, those aren’t real movies. They are, at the least, tryouts before making slick Hollywood movies.

That’s why Bob thinks he would “hate” a Kuchar film. After watching It Came From Kuchar, the only way he can figure out what the twin brothers are trying to achieve with their films is to compare them to independent filmmakers like Edward D. Wood Jr. and Herschell Gordon Lewis — not other underground filmmakers.

The Kuchars, on the other hand, make intensely personal films that, while mimicking Hollywood techniques, aren’t trying to seriously replicate them. So, Bob thinks he would “hate” the Kuchar films because he would evaluate them on their technical mastery first, thinking they are films trying to achieve technical mastery, and find them lacking.

Underground film is an intensely personal cinema — and intensely personal expression is, unfortunately, not something to be particularly valued in our culture. I would argue that a film like Mike Kuchar‘s low-budget and scrappy Sins of the Fleshapoids tells me much more about Mike Kuchar than, for example, Christopher Nolan’s slickly realized Inception tells me about Christopher Nolan. I know far more about Kuchar’s interests and obsessions than Nolan’s, which is ironic given that Inception is a film all about obsession.

This is not a slam against Inception — I enjoyed the film very much. Nor am I arguing that personal expression is the supreme goal of filmmaking. But there are different levels of appreciation for different styles and intents of filmmakers, that judging films solely for their adherence to technical capabilities — and by “technical” I’m including methods of acting and storytelling — is, frankly, a mistake.

To expand on King’s quote above, not only do her students not think that the viewpoints of people with their cultural backgrounds should be represented on film — they “learn” from mainstream media that their own personal viewpoints do not matter. I think the lessons that King is teaching are absolutely essential to greater media literacy, which is crucial for an enlightened society, but these lessons also need to be taken to the next level: Media participation.

This is where underground film blogging becomes important: To give an outlet to the traditionally disenfranchised and to treat them with the respect that they deserve. It’s one thing to make personal media, and there’s great satisfaction just in the act of creating, but it’s another thing to discover that somebody else out there who greatly values that creation.

And by “greatly valuing” I don’t mean just giving blanket positive reviews to underground media, but by giving it as much careful thought, consideration and evaluation that traditional media review outlets gives to traditional media made within or adjacent to the Hollywood system.

Underground film is not for everyone. Not everyone will enjoy it, even if greater media literacy grows through the efforts of people like Jessica King. But those who do enjoy it are, as of today, a mostly silent audience.

The film blogosphere is constantly growing with amateur reviewers popping up almost everyday. But these reviewers mostly focus on mainstream media because that is what they are mostly exposed to, unless they’re the adventurous type, like Bob who decided to take a chance on It Came From Kuchar even though he was completely unfamiliar with the brothers’ films.

It’s understandable when profit-driven media ignores the underground. So, most writing about this field has been confined to the art journal world, which has embraced film and video making as an extension of the traditional arts.

While writing about film as art is a valuable endeavor, writing on underground film also needs to get out of the art “ghetto.” It needs to develop as a distinct critical study that makes a serious impact on everyday life.  Writing about film as an important and serious personal endeavor will help encourage a populace to learn that their personal expression is necessary and beneficial for helping society grow for the better.

Part of that notion is lofty idealism on my part, but part of it comes from the practical experience of interacting with underground filmmakers every day, many of whom this website is the only website that will either review their films period or at least review them with the same depth and respect that mainstream films receive.

Underground media is “underground” for a reason: It’s typically strange, unusual and outside the norm of what people expect from entertainment media. But a stronger, more visible underground film blogging culture could help people come into contact with it more and understand what this beloved, under-appreciated medium is capable of.

Underground media will never supplant or coexist equally with mainstream media,  but it deserves a bigger audience publicly sharing their love and interest with the world.