The term “underground film” has never enjoyed a popular definition. Oh, some writers have attempted formal definitions, but I doubt there will ever be one that is popularly agreed upon. It’s not even a term that can be agreed upon to be used. But, it is used and I personally have billed this site “The Journal of Underground Film,” so I thought I’d give my general perception of what “underground film” might mean to contribute to an ongoing dialogue about it.

And I prefer to consider writing a post like this as contributing to a dialogue because I do not have any interest in trying to build a definition myself. However, what I can say is that “Underground film” is not a genre. Actually, what leads me to use the term “underground” is that it feels to me to be a catch-all for other genres.

Avant-garde, experimental, poem, critical, invisible. These are all terms that have been used to describe the types of films that I myself would consider underground. Out of them, the two most popular next to underground are avant-garde and experimental. What I don’t know — because I haven’t researched it yet — is where and when the terms “avant-garde” and “experimental” started being used in regards to film, but I do know the origin of the term “underground.”

I previously wrote about this in my appreciation of J. Hoberman and Jonathan Rosenbaum’s essential film book Midnight Movies. That book is where I’m getting the following information:

“Underground film” was first used by the film critic Manny Farber in a 1957 article for the magazine Commentary, but he used the term to refer to action movies made by under-appreciated directors like Howard Hawks and Raoul Walsh. Then, in 1961, experimental animator Stan Vanderbeek used the term again for a manifesto published in Film Quarterly. Except, Vanderbeek used the term to describe the films of his fellow avant-garde and experimental filmmaking peers, such as Jonas Mekas, Robert Breer, Bruce Conner and Stan Brakhage.

Another thing I don’t know is just how widespread the use of the term “underground film” was post-1961. The underground film movement of the ’60s didn’t really kick into high gear until 1963 with the release of Jack Smith‘s Flaming Creatures. Then, in the following year, Stan Brakhage finished his epic Dog Star Man and Kenneth Anger released Scorpio Rising. 1965 and ’66 saw the release of Mike Kuchar‘s Sins of the Fleshapoids and Andy Warhol‘s Chelsea Girls. These five films can arguably be considered the most significant highlights of the movement.

While those films all do share similarities, such as all of them having a narrative of some sort or another, their actual styles and productions wildly differ, which is why “underground film” cannot be pinned down as a specific genre.

It is a film conceived and made essentially by one person and is a personal statement by that person. It is a film that dissents radically in form, or in technique, or in content, or perhaps in all three. It is usually made for very little money, frequently under a thousand dollars, and it’s exhibition is outside commercial film channels.

I don’t think that is a perfect definition and the inclusion of specific monetary value dates it, but it’s a workable one at least, particularly the phrase “dissents radically in form, or in technique, or in content, or perhaps in all three.” I think that’s where the key to what underground film is all about lies. Underground film “dissents radically” from regular commercial filmmaking, although that dissension can come in myriad ways.

However, what’s interesting is that the only reaction to Renan’s book from that time period that I know of comes from Scott MacDonald’s awesome Canyon Cinema. MacDonald reprints a review of it written by Emory Menefee that was published in the Nov. 1967 issue of the Canyon Cinemanews newsletter. Menefee gives Renan’s An Introduction a passing grade, but specifically says:

It is unfortunate that the word “underground,” with all its dark hint, has to be the one most favored by those publicizing independent films — though there is no adequate substitute … 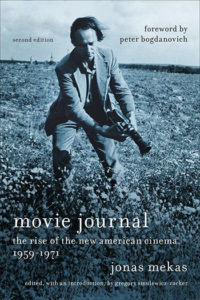 As I said above, I don’t know just how “favored” the word underground was, but a quick survey of Jonas Mekas’ Movie Journal, collecting his wildly popular Village Voice column, has him dropping it quite frequently into those columns in 1967, the year Renan’s An Introduction was published.

(And as a side note, Scott MacDonald, one of underground film’s greatest writers and proponents prefers the term “critical cinema” to “underground.”) (Another side note, this one to Menefee’s quote above: “Independent film” didn’t quite mean what it does today, either.)

“Underground film” as a movement petered out sometime in the early ’70s, sometime around when Mekas stopped writing Movie Journal in 1971, although as I’ve shown in my Underground Yearbook posts, there were still many, many films that could be considered “underground” produced throughout that decade.

Then, in 1994, filmmakers Todd Phillips and Andrew Gurland held the first ever New York Underground Film Festival (NYUFF), which, as far as I know, was the first festival to use the word “underground” in its name. (Side note: Todd Phillips would later go on to direct Hollywood comedies, such as the recent hit The Hangover.) Also, that same year, the Chicago Underground Film Festival would be founded, officially launching the phenom of “City X” Underground named film festivals.

The centerpiece film of that first NYUFF was Chicken Hawk: The Men Who Love Boys, a documentary about the North American Man/Boy Love Association by Adi Sideman. I haven’t seen Chicken Hawk, but from what I understand, it’s a traditionally structured documentary, in that it doesn’t dissent radically in form or technique, but does so in content in that it covers a disturbing topic that most consumers of commercial cinema probably wouldn’t want to watch a film about.

That’s where the definition of “underground film” gets tricky. Stan Brakhage taping dead moths and leaves to a strip of film is a radical dissension of technique. Thus, Brakhage’s Mothlight (1963) is an “underground” film. But also, John Waters‘ earliest films can be considered “underground” even though they’re traditionally structured comedies since filming acts like a transvestite eating real live dog shit in Pink Flamingos is so taboo that it dissents radically from commercial film content.

But then there are even trickier areas, such as with Suki Hawley and Michael Galinsky‘s Half-Cocked, a traditional narrative film about a touring indie rock band. This particular film can really be considered an “indie” film and not “underground,” even though it did screen at the second annual NYUFF in 1995. However, the music featured in the film was and is situated fairly out of the mainstream, which would lean it towards the underground enough to be considered and programmed at that particular festival.

On the Underground Film Journal, I do cover some very traditional films, especially if they’re horror movies, such as Evilution and Basement Jack. I do that because, well, it’s my website. But, I also think they serve some value to readers of “The Journal of Underground Film” in that they are a “personal statement by that person.” It may not be obvious, but that person in these two films’ particular case is writer/producer Brian Patrick O’Toole.

So, as this post is becoming ridiculously long, what’s the answer to that initial question: What’s an underground film, anyway? Essentially, I believe it is a film that is a personal statement by one person and a film that dissents radically in form, or in technique, or in content, or perhaps in all three. However, that dissension can take on any number of forms.