Anthony Rivero Stabley, who may have directed just about the sexiest underground film in history (it’s up there anyway), Marta’s Sex Tape, has recently announced the completion of principal photography on his latest project, Electronica 2. To give people a taste of the new film, we have some promotional images for it below. (An embiggened version of the above photo is included.)

Electronica 2 is the second part of a planned trilogy. The first, award-winning part can be watched on Metacafe, but I’m embedding that below, too. It tells the brightly colored story of a pretty girl’s journey across the grimier side of Hollywood. And that’s Hollywood, as in the run-down neighborhood, not the industry. You know things are bad when an encounter with a filth-encrusted, shirtless homeless dude is the high point of your day.

Click the below thumbnail to see the full gallery featuring Najarra Townsend, Christine Robertson and, for the ladies, sexy director Anthony Rivero Stabley himself at work. Then stay tuned for the film below them. 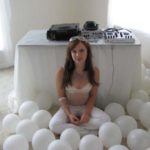 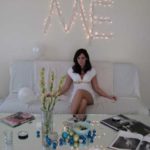