SouthSide Screening: Plagues And Pleasures On The Salton Sea

Co-directed by Chris Metzler and Jeff Springer, Plagues & Pleasures on the Salton Sea tore up the underground film festival circuit last year, playing in Miami, San Antonio, Evil City and tons of other places. And, it’s getting yet another public screening at the SouthSide Film Festival’s Third Thursday event this month. The Thursday in question is Sept. 20 at 7:15 p.m. in Bethlehem, Pennsylvania on the Second Floor of Goosey Gander. It’s a great film. I should know. I reviewed it here. And I believe it’ll be available on DVD just a few days after the screening.

The Third Thursday event will also include a couple of short films: A Funny Thing Happened at the Quick Mart, dir. Dave Yarovesky and Car Free, dirs. Susan Hartman and Laura Hamblin. I can’t vouch for those films, but I’m sure they’re great.

And, here’s the Plagues & Pleasures trailer: 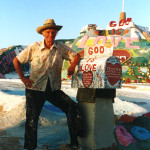