A pretty female inmate is given a death sentence in Oren Shai’s moody noir short film Condemned, embedded above. But, the twist here is that Inmate #1031 (Margaret Anne Florence) isn’t being sent to the electric chair by the state. Instead, she’s going to get the shiv from another prisoner if she dares to fall asleep in her cell. The lesson: Never snitch, and be particularly careful if the warden tries to trick you into doing so.

This is a simple film with Shai focusing almost exclusively on mood and character. All the action takes place in a single prison cell without much backstory to explain the events that we’re witnessing. That’s good because the backstory is superfluous. Shai isn’t trying to reinvent a genre. This is a tribute to classic women in prison movies.

Of course, there’s going to be trouble in prison. Of course, the main character’s life is going to be in peril. So, why bother going into the details? Shai gives us enough to make Inmate #1031’s plight seem genuine and make us concerned for her fate. Nothing more, nothing less.

For several stretches of the film, Florence — who in certain shots with the lighting and her hair in her face is a dead ringer for a slightly older Emma Watson — is alone in her cell. Her panic, isolation and desperation registers strongly in every scene. She’s a good girl stuck in a terrible situation.

As for the other actresses: The female guard (Ashlie Atkinson) is the typical, no-nonsense, tough-as-nails type, although there are glimmers of concern that’s she’s unable to act upon beneath her tough exterior. And #1031’s new cellmate, Inmate #1059 (Aprella) is the coy, blonde bombshell “bad girl” who successfully hides her true motivations.

The film’s harsh, focused lighting gives it an overall B&W feel without the film actually being in B&W. Most of the decor and costuming is gray, so the colors, when they appear — whether it’s the blood dripping from #1031’s foot, or the yellow paperback cover of Return to Peyton Place — really stand out and command your attention.

There’s also a sultry, sexy feel to the film, even though the uniforms on the inmates are as revealing as potato sacks and if you’re expecting that kind of women in prison film, look elsewhere. (This is a tribute to ’50s movies, not ’70s.) Instead, the simmering, sweaty tension creates a sense of menace that oozes in every shot. 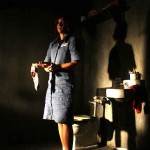 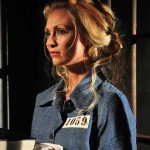 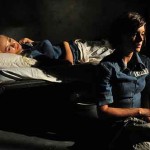 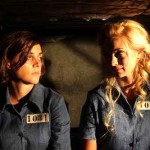 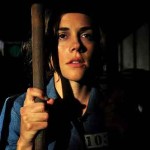 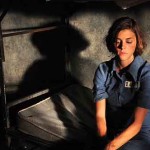 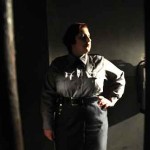 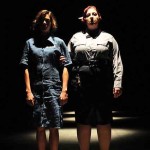 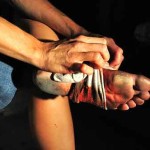