The Human Centipede (First Sequence) is the “100% medically accurate” horror movie by Dutch filmmaker Tom Six that answers a very important, scientific question: Can a 5-minute idea actually sustain a 92-minute feature-length film? Surprisingly, the answer is “yes” — as long as the viewer goes into it with the same spirit of grotesque fun that the concept provides.

The concept is basically a reworking of the Frankenstein story. But, whereas Dr. Frankenstein sewed together body parts taken from various corpses to create his monster, the evil Dr. Heiter (Dieter Laser) sews together three very much whole and alive victims. As the title indicates, Heiter sews them together ass-to-mouth, so that his final creation mimics the segmented torso of a centipede. With all the foul implications that idea suggests.

(Of course, the twelve limbs of the trio of unfortunate souls sewed up into this revolting configuration don’t match the 100 limbs of an actual centipede, but that just speaks to the arrogance of Dr. Heiter, who is played with a wonderful deadpan menace by Laser.)

Six is wise enough to understand that the truly horrific aspect of the film is its premise. Once the centipede is sewn together, what can one really do with it? Therefore, the majority of the film is structured around the set-up.

Story-wise the film is rather crafty and admirable with the suspense building nicely through traditional horror film conventions. Victims are captured, then valiantly try to wiggle their way out of their situation before the good doctor can begin his sewing operation.

There’s loads of screaming and crying and running around the house trying to escape their nightmarish fate. But, of course, we know the victims’ fates are inevitable, maybe even more so than in other horror movies. (With no actual human centipede, there’s no movie, right?)

The two lead actresses, Ashley C. Williams and Ashlynn Yennie, are two real troopers who need to be commended for their bravery for taking on these roles. Because, really, except for ending up the middle and end sections of the centipede they don’t have much to do.

Obviously, the girls don’t have any dialogue once they end up as part of the centipede. And what they have to say before they have their mouths sewn to a butt isn’t memorable, either. That seems to be a particular failing of modern slasher films.

Williams and Yennie’s characters — and they’re so interchangeable it doesn’t matter what their names are — aren’t as obscenely bland and/or irritating as the victims in, say, an Eli Roth Hostel movie. But it would have been nice if they had been given real personalities.

Besides the doctor, the only other person in the film with a personality is Akihiro Kitamura, who plays the young, non-English speaking Japanese man who becomes the centipede’s first segment. Kitamura’s raging performance is funny without being obvious comic relief.

As for the gory special effects, Six totally takes on a “less is more” philosophy. Probably the most revolting scene is the one where the good doctor simply explains to his victims the medical procedures he must perform to transform them into his monster. The actual operation scenes are few and quickly cut. And, anyone looking for that detailed closeup of what a mouth sewn to a butt physically looks like, might be disappointed to find their view blocked by diapers and bandages.

Plus, while there are a few scenes of the centipede crawling in unison, mostly we see the creature set in specific locations — e.g. in the living room, outside on the lawn, by the pool, etc. — without seeing how it was transported there. It’s not until the finale when we get to see some major centipede locomotion.

While it’s not accurate to completely diminish the fact that looking at three human beings sewn together is kind of revolting to look at, as it turns out, it’s simply presenting the idea of humans being sewn ass-to-mouth that’s the grossest thing about The Human Centipede. Truly, the most shocking thing about this unique horror film is just how subdued it is overall. 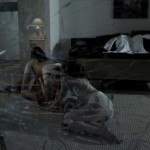 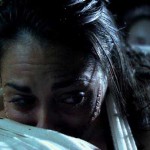 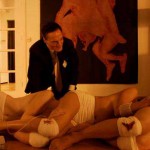 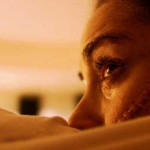 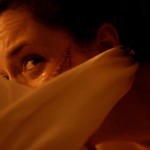 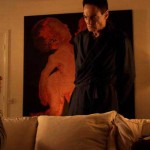 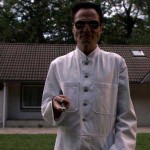