Actually, when the film begins in a secret Iraq testing facility and a doctor in a lab coat is pursued by “zombie” soldiers, you think you’re watching a direct-to-DVD sequel to Boyle’s horror hit. You know, one with the kind of zombies with a look of rage in their eyes, blood covering their neck and chin and are somehow now expert parkour athletes?

But after the bombastic opening, the action moves to an unnamed American city — but probably Los Angeles — where a nerdy guy named Darren (Eric Peter-Kaiser) moves into a dusty basement apartment in a building on the “wrong” side of town. And we know it’s a bad neighborhood because almost immediately Darren is hassled by three Latino gangbangers (Asia Mark, Killah-B and Random (James Duval, Guillermo Díaz and Noel Gugliemi respectively). On the other hand, he’s also hit on by his improbably horny and hot Latina upstairs neighbor Maddie (Sandra Ramírez). (In case it’s not obvious, Darren is a “white boy.”)

Then, faster than you can say Herbert West — ok, slower, as it takes awhile for the action to kick in — Darren is injecting a dying gangbanger with the “re-agent” that he smuggled out of the Iraq facility. Also, thanks to a desperate junkie (Billy Morrison) and Maddie throwing herself at Darren so he’s preoccupied, soon the entire apartment building is filled with the mindless raging zombies.

Basically, the bulk of the film is made up of time-wasting scenes until the final act payoff. The movie’s never boring, though. Director Chris Conlee knows not to take the material too seriously as well as not to make it too goofy. It’s not a jokey movie in the least, but Conlee keeps a light hand. The dialogue is pretty much bargain basement like the room Darren lives in and the relationships are merely plot devices, but it all goes down very easily, a lot of it I think due to the charm of the main characters. Particularly good in the film are the gangbangers, Duval, Díaz and Gugliemi, who are stuck most precariously walking the line between being caught in a serious situation and sometimes stuck in the roles of comic relief. But all three of these guys are great character actors.

Back to the third act payoff: It’s a good one. Although we haven’t seen any of the other tenants up until this point, suddenly the entire building is filled with rage-filled zombies. Again, a little humor is thrown in to get our main characters upstairs while everybody behind their closed doors are being eaten and transformed. However, there are tense action-filled scenes while our heroes fight back the blood-soaked hordes. There’s some cannibalism scenes that aren’t meant to be too convincing, but there’s so much general gore and blood thrown around that it doesn’t matter. There’s more scares than laughs, but a few yuks get effectively thrown in. Honestly, the running gag about beating down a zombie grandmother: Pretty funny.

Conlee is primarily an editor by trade, working on several TV shows and low-budget features. Although, here he has employed another editor, Brian J. Cavanaugh, he keeps the pace of the film snappy and moving along on his directing debut. And the music is by Halloween II and III‘s Alan Howarth.

The so-called fast-moving “rage zombie” has become a little bit overused since the heyday 28 Days Later and Zack Snyder’s Day of the Dead. But still, Evilution is a diverting enough little pleasure, so its ok.

(This film was sent to the Underground Film Journal as a screener from the 2008 Spooky Movie Film Festival, Washington, D.C.’s horror film festival, which runs this year Oct. 16-20. However, Evilution will play during a special preview night on Oct. 11.) 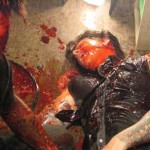 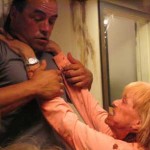 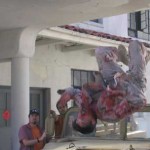 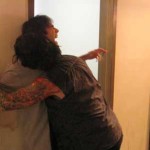 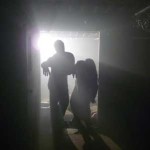 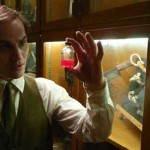 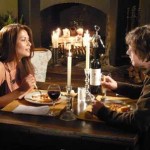