The act of writing is — for the most part — a lonely, solitary activity and not very cinematically engaging, both visually and emotionally. Yet, filmmakers keep making films about writers. The way successful films make writers and their occupation exciting is usually by surrounding them with active characters with intense personalities.

For example, the Coen brothers paired up Barton Fink with a serial killer and Stephen King pitted author Paul Sheldon against maniacal super fan Annie Wilkes in Misery. (Granted, Misery was a book first, but Rob Reiner and William Goldman transformed it into a pretty stellar, cinematic film.)

Deacon never actually shows Bannister writing, but we learn through dialogue that he’s some sort of unholy cross between Jim Thompson and Stephen King. Also, like those two real-life authors, he has an addiction problem, mostly to alcohol, which has cost him a marriage and anything even remotely resembling a normal life.

Bannister is a hermit who doesn’t fall asleep every night as much as he does pass out in a drunken stupor in his fancy high-rise apartment. During one of these episodes, he’s awakened in the wee hours of the night by a bubbly brunette named Tammy (Poppy Cherry) wearing nothing but a coat and some lingerie.

She’s not there to seduce him. That’ll be up to her friend Veronica (Christina Hallett), a seductive blonde wearing the exact same outfit as Tammy, but with black undergarments instead of red.

Evans is convincing as a misanthropic, borderline misogynistic crank. But his sleepy seduction with the sweetly coy Hallett is completely overpowered by the vivacious and energetic Cherry, a true scene stealer if there ever was one.

Cherry’s presence completely dominates all of the film’s early scenes. Even when she skips out for awhile to take a shower in Evans’ bathroom, you’re just waiting for her return. And when she does, her reappearance includes a swift action of senseless violence.

Sexy girls. Shower-taking. Seduction. Violent action. In the first half of the film, Deacon appears to be setting up a well-done, but fairly inevitable thriller. The women, who try to present themselves as naive waifs, clearly have other motives in mind. Plus, the whole fantasy of a messed-up drunk being spontaneously visited by a pair of dream girls is a clearly ludicrous concept to begin with.

However, just as the film seems to be settling into an entertaining, but somewhat predictable groove, Deacon completely switches gears on the audience. That switch is introduced via some obvious technical filmmaking mistakes that a forgiving audience will able to overlook. But those “mistakes” are eventually proven to be very deliberate manipulations on Deacon’s part.

Eventually, the film becomes a total Pirandello swirl that switches between the fiction of Bannister’s writing, the reality the characters are experiencing and the reality of the film that’s being made.

Tammy and Veronica force Bannister to take a long, dark journey into his soul. But, it’s a fun journey that Deacon, who also wrote the script, keeps bouncing along. Even an extended talky sequence that takes place entirely just in an automobile has chatty, catty dialogue that’s tinged with humorous, sexy undertones.

The title Burlesque refers to the alleged occupation of Tammy and Veronica, who claim to be dancers and which would potentially explain their odd garments when they visit Frank. While there’s not much actual burlesque action in the film, Deacon does employ a whole lot of seductive teasing, but just not in the way that may be expected. 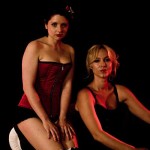 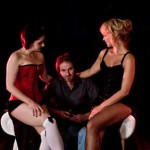 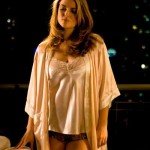 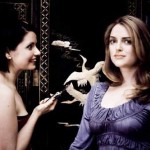 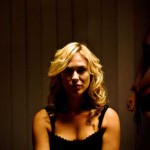 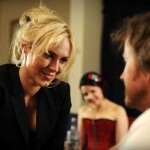 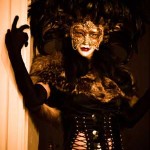 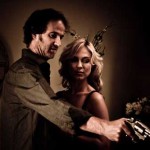 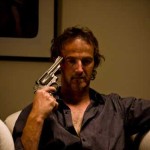