Basement Jack is a nice throwback to ’80s slasher films with a glossy modern sheen applied. While the eponymous serial killer may not have the instant mythologizing appeal of a Freddy, Michael or a Jason, he is one of the more original and unique slasher creations set loose in a fun and entertaining murderous romp.

Jack Riley (Eric Peter-Kaiser) has the requisite backstory for any good movie serial killer. Thanks to a traumatic childhood, Jack has grown up with the desire to stab, spindle and mutilate everybody he comes into contact with. However, it’s Jack’s methodology of picking out his particular victims that elevates him from being just another Jason knock-off into standing on his own two psychopathic legs.

Raised by a looney tunes mother (veteran horror vixen Lynn Lowry) who loved to sadistically electrocute her son every chance she got, Jack now visits homes headed up by blonde-tressed matriarchs who remind him of dear ol’ mom. He then hides in these families’ basements for weeks at a time to study them before slicing them to bits. Once everybody’s dead, he arranges the corpses into freaky tableaus of idealized happy homes — just like the kind he wanted as a boy.

Have You Seen This Movie? Streaming:

The majority of the film is concerned with the only victim, Karen (Michele Morrow), to have escaped Jack’s blade. Arriving in the small suburban town of Downer’s Grove, Karen fulfills both the Laurie Strode and Dr. Loomis roles of Halloween. While Jack is hot to slit her throat once and for all, she must convince the local police department, and particularly handsome rookie Officer Chris (Sam Skoryna), that Jack is on the way to turn their peaceful hamlet into a slaughterhouse.

The movie does drag a little during the interactions between Karen and cops, which tend to get repetitive after awhile. Plus, there doesn’t seem to be much chemistry, sexual or otherwise, between Morrow and Skoryna. Had the film developed Jack’s victims into more full-rounded characters and extended the scenes of the killer peeking up at them through floorboard ventilation shafts while they lived their happy little lives may have spiced the plot up a bit.

As far as joining the ranks of iconic slashers, Jack does hold his own as a formidable presence in his debut film. Although he fits into the category of “silent but deadly” killers, for the majority of the film he forgoes the tradition of hiding his face behind a mask. Frankly, he doesn’t need one. The handsome Eric Peter-Kaiser is virtually unrecognizable with his grimace hidden behind facial hair and greasy, black locks dangling in front of his eyes. But when he eventually acquires a doll mask that only covers up from his jaw to his nose, the addition is spectacularly creepy.

However, the real star of the film is Lynn Lowry as Jack’s mom who turns in an absolutely evil performance that’s a combination of Piper Laurie in Carrie, Diane Ladd in Wild at Heart and Martine Bartlett as Sybil‘s mom. In numerous flashback sequences, Lowry really digs her claws into this character that hides a completely over-the-top evilness beneath a sunny suburban mom exterior. She makes her scenes into the most alive and energetic ones in the entire movie. Lowry has worked with some of the great horror movie directors, including Romero and Cronenberg, and she brings her entire career starring in cult and underground films to a boiling point in Basement Jack.

The overall look of the film is slicker and more polished than an ’80s slasher flick obviously, but director Michael Shelton also adds some extra modern elements to the visuals. At least one scene — a basement fight scene appropriately enough — seems Matrix-inspired while stopping a few steps short of using actual bullet-time photography. (Thank God.) But many of Jack’s murders are done with obvious CGI-effects, which aren’t distracting, but they are noticeable, particularly in how the give-and-take element of a fake knife rubbing against fake flesh is missing. The positive trade-off, though, is that there are less distracting cutaways of good kills — something that ruins old, cheap slasher movies. Shelton doesn’t have to insert a close-up of a knife plunging into a torso. Instead, we can see the full body of the victim, including the actor’s facial expressions, which in many ways is much more effective than an overbearing reliance on cutaways.

Finally, Basement Jack is the second part of a loose trilogy written and produced by Brian Patrick O’Toole. The first film is Evilution and both movies have scenes set in the same dusty old apartment building called the Necropolitan. Jack really only includes a few sly nods to Evilution, which can be fun for folks who have seen the first film. (I’m one of them.) However, one or two extended scenes with the same manager character may throw off people who haven’t. Both movies also feature actors in different supporting roles, including character actor Noel Gugliemi and musician Billy Morrison (Camp Freddy).

Basement Jack, the character, is a good second generation to his more famous first generation brethren. While I don’t want to “spoil” anything by saying whether or not Jack gets away at the end, but ever since Michael Myers was stabbed in the neck and eye and got shot six times in the space of 10 minutes and still managed to walk away, how many slasher movies have had definitive endings? Regardless of Jack’s fate at the end of the film, he is a creation worthy of generating his own franchise. 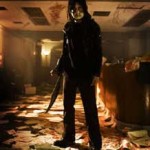 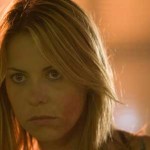 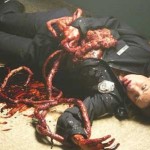 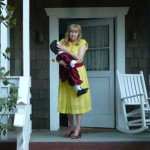 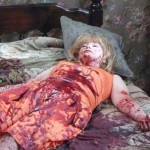 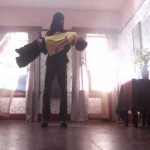 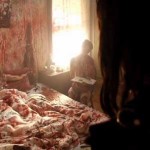 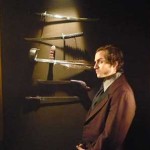