Movie Journal: Rise of the “Underground” 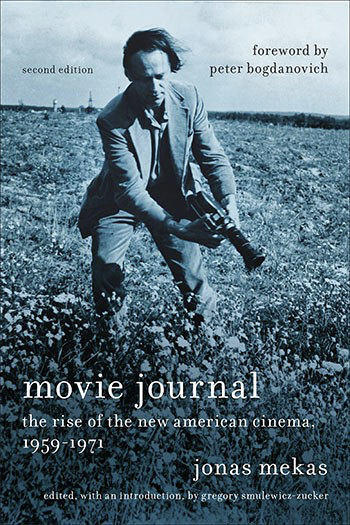 In the Summer 1961 edition of Film Quarterly, Stan Vanderbeek was the first person to refer to experimental filmmaking as the “underground.” A filmmaker himself, Vanderbeek was frustrated that his work and the films of his peers — such as Stan Brakhage, Hilary Harris, Robert Breer and Robert Frank — was not being considered as serious art by the broader cinematic culture.

Eventually, the term “underground film” would become part of the regular movie vernacular, but was it adopted slowly or quickly after its first appearance in 1961?

Jonas Mekas‘s “Movie Journal” column in the Village Voice was the main organ promoting experimental and avant-garde cinema in the early 1960s. A survey of the column from that time period has shown that Mekas did not use the term “underground film” very frequently.

At approximately the same time of the Film Quarterly issue, Mekas devoted a column on May 4, 1961 to three filmmakers. Mekas began the column with:

Stan Vanderbeek, Joseph Marzano, and Dick Preston are three of the most talented young men that have entered the American “underground cinema” in the past year.

Later in the same column, Mekas let Vanderbeek speak for himself, where he wrote: “There is a large body of creative film-makers who have been forced to work in darkness; these artists make up a group I call the “American Underground Cinema.” It’s worth noting that Vanderbeek did not use that group’s name in his Film Quarterly article, and instead only made two oblique references to the film “underground.”

Most, but not all, of Mekas’s “Movie Journal” columns have been reprinted in the book Movie Journal: The Rise of a New American Cinema, 1959-1971; and a significant amount of Village Voice editions — again, not all of them — can be found at Google’s archive of the weekly newspaper.

It is unfamiliarity with the creative processes of art as a constantly changing manifestation of man’s spirit that has, recently, provided us with foolish statements about the so-called New American Cinema. (I may have to drop that name! When I used it first, I didn’t suspect that fools would make a flag out of it.)

Since the early ’40s, when the entire generation of experimental film-makers came into being in San Francisco and New York, there hasn’t been so much bustling in the film underground.

But it is Rice, Brakhage, Menken, Breer, Leacock who are waging the real revolution of new cinematic forms and content.

I happen to know the depth and scope of the revolution in form and content which is going on in the film underground today, and I can’t be silent about it.

I don’t think a responsible movie critic can go by people’s definition of cinema. That’s why I go back to the underground. I know that the majority of you cannot see this cinema; but that is exactly the point: It is my duty to bring this cinema to your attention.

A renaissance is on the way in film underground. New works of startling and glorious beauty are appearing. This is one of the beautiful periods of the American cinema. There are about twenty low-budget features in the making in New York underground at this moment. And when I say low budget, I mean low. Jack Smith‘s film, Flaming Creatures, certainly one of the most beautiful and original films made recently anywhere, was made with $300. That is the freedom of the underground film-maker.

With the new blossoming of film-making, there is an equal upsurge of audience interest in underground cinema.

Surely we have no intention of hiding in the underground all the time.

In the July 13 issue of the New Yorker magazine, we were presented as angry underground film-makers. Which was very nice. But the truth is, we love the world and we hate nobody.

Underground cinema, yes. But the truth is that the whole change of man’s mind and heart is happening underground (in the lower, not very much respected regions). High above ground there is too much unnecessary noise going on.

These would be terrible times if the film-makers had to hide their films from the police and some of the best of our artists had to show their work only in secret undergrounds. That would be terrible. But that’s where we find ourselves today!

Don’t tell us we are “underground.” We, truly, are closer to the sun, throwing light into the sad darkness, joy and love and beauty into the dark undergrounds of human misery.