In 1997, the Chicago Underground Film Festival held its fourth annual edition on August 13-17 at the Theatre Building at 1225 W. Belmont Avenue. One way the festival promoted itself that year was it published a four-page pull-out section in the Chicago-based political magazine Lumpen, vol. 6 no. 4.

These pages included the entire festival schedule, which the Underground Film Journal has re-created below. In addition, scans of the original Lumpen pages appear at the bottom of this article. This program schedule did not include director names for the most part, but the Journal has included names that we could find through research.

This edition of CUFF featured the work of several classic underground film names. In addition to several programs with John Waters, including the above-mentioned performance piece “Shock Value” and a conversation between Waters and actress Mink Stole, the festival screened Waters’ classic feature Female Trouble.

CUFF also hosted a retrospective of the work of Jack Smith, who had passed away in 1989. All works were screened on film, including Smith’s iconic Flaming Creatures, plus his other films No President, Normal Love, and I Was a Male Yvonne De Carlo.

The Closing Night feature was a new documentary by Beth B, Visiting Desire; and, on Friday, the festival screened Heavy Metal Parking Lot by Jeff Krulik and John Heyn, plus other videos by Krulik. On Saturday, Jack Sargeant screened two classic “Beat” movies — Pull My Daisy by Robert Frank and Alfred Leslie; and Peter Whitehead‘s Wholly Communion — in support of his then-new book Naked Lens. After the Beat screening, Sargeant signed copies of Naked Lens at Quimby’s Bookstore along with comic book artist/writer Dame Darcy, who was starring in Lisa Hammer’s (The Elaborate) Empire of Ache screening at the fest.

Other films that now stand out in the festival lineup include an edition of Jennifer Reeder‘s “White Trash Girl” series Law of Desire; George Kuchar‘s Vermin of the Vortex, Crimes of Fashion: The Return of El Frenetico and Go-Girl sequel directed by Pat Bishow, Jon Moritsugu’s feature Fame Whore, Charles Pinion‘s short Madball, and Strange Babies From Planet B directed by the late animator Jon Schnepp.

Here is the full schedule:

7:00 p.m.: Love God, dir. Frank Grow. Starring Will Keenan. A schizophrenic man is released from a psychiatric hospital and stops taking his medication whereupon he is besieged by monsters and other lunatics.

11:00 p.m.: Half-Spirit: Voice of the Spider, dir. Henri Barges. A woman escapes captivity and starts hearing the voice of a spider in her head.

5:30 p.m.: The Electric Urn, dir. Dean Bivins. A young transvestite tries to get ahead in the acting world of New York City.
Screened with: Super Thrill Over Kill, dir. Eric Brummer

11:15 p.m.: Isle of Lesbos, dir. Jeff B. Harmon. A woman in a small town gets transported to a magical dimension where lesbians rule.

2:30 p.m.: Two Small Bodies, dir. Beth B. A detective uses extreme interrogation techniques on a woman who may have killed her two children.

4:15 p.m.: Hang Your Dog in the Wind, dir. Brian Flemming. A couple friends from L.A. drive into the desert to find their missing friend.
Screened with: Candy Is Dandy, dir. unknown

9:00 p.m.: Driver 23, dir. Rolf Belgum. The documentary follows the travails of a rock band that has dreams of making it big.
Screened with: Rock & Roll Punk: The Trailer, dir. Jim Sikora

10:45 p.m.: The Bride of Frank, dir. Escalpo Don Bladé. A lunatic dates women and murders the ones who are mean to him.

2:30 p.m.: Female Trouble, dir. John Waters. A juvenile delinquent runs away from home, becomes a single mom and is transformed into a criminal superstar by a married pair of psychopaths.

3:45 p.m.: “John Waters & Mink Stole: The Making of Pink Flamingos” The director and one of the stars of the legendary cult classic discuss the film.
Also shown: Love Letter to Edie, dir. Robert Maier

6:00 p.m.: “Shock Value: An Evening With John Waters” A performance piece by the legendary cult director.

Here are the program scans from Lumpen: 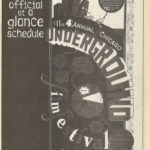 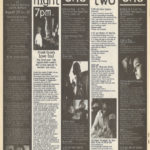 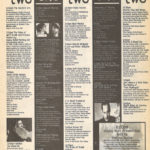 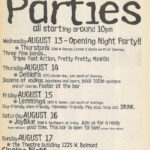 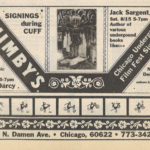