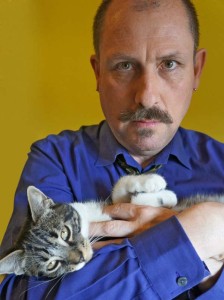 My Cat is currently named Tikky and lately he’s been waking me up by biting my face at 6am. I make all kinds of films and I also perform with film and music. Recently, my work has gone a bit abstract and psychedelic, but I’m now making a short documentary about the London Exploding Cinema Collective.

We first became aware of Duncan Reekie way, way back in 2001 when he screened his collaborative film, Maldoror, at the New York Underground Film Festival. The film was ostensibly a feature-length adaptation of the controversial 19th century poetic novel in which a different filmmaker was to adapt a different chapter of the book. Some did, some made their own unrelated short film, creating a confusing and highly entertaining cinematic experience.

Duncan has been a central figure of the Exploding Cinema that he is currently making a documentary about. Plus, in addition to making films and curating screenings and events, he wrote the mind-blowing history of British underground filmmaking Subversion: The Definitive History of Underground Cinema that is mandatory reading for any underground film nut, like ourselves.