In 1983, the Walker Art Center in Minneapolis, Minnesota, along with Media Study/Buffalo, created a touring retrospective of avant-garde films, primarily feature-length ones and a few shorts, which they called “The American New Wave 1958-1967.” To accompany the tour, a hefty catalog was produced that included notes on the films, essays by film historians and critics, writings by major underground film figures and more.

The retrospective was created at a time when financially viable independent filmmaking was on the rise, such as films made by John Sayles, Wayne Wang and Susan Seidelman. According to the co-curators of the retrospective, Melinda Ward and Bruce Jenkins, the objective of the tour was to:

provide a more adequate picture than conventional history affords us of a rare period of American cinematic invention and thereby prepare a coherent critical and historical context for the reception of the new work by the current generation of independent filmmakers.

The full list of films that screened during this tour is below, but it included work by John Cassavetes, Shirley Clarke, Robert Downey Sr. and George Kuchar.

Since the tour occurred prior to the explosion of the Internet, there are very little records to be found online as to where these screenings actually occurred. The catalog notes that it began with a 3-day symposium at the U.S. Film and Video Festival in Park City, Utah in January, 1983. (The U.S. Film and Video Festival would eventually evolve into the Sundance Film Festival.)

The only online reference to the program screening somewhere is on the Berkeley Art Museum – Pacific Film Archive’s archive website. BAMPFA screened the full program from September 6, 1983 to October 4, 1983 on a succession of Tuesday nights.

While knowledge of the actual touring locations is limited, the catalog produced for the tour includes a wealth of information on underground filmmaking of the 1960s. Print versions of the catalog can be found for sale on Amazon, while somebody uploaded an incomplete PDF of it to Archive.org. (The PDF is missing page 14.)

Most fascinating are the reprinted diary entries of Jonas Mekas ranging from December 10, 1954 to sometime in 1963. These are Mekas’s raw thoughts on major events happening in New York City as the underground filmmaking world was cementing itself as a viable film movement. Some of the revelations found in these diaries are:

May 5, 1959: Mekas meets Ron Rice for the first time. Rice was a fan of Mekas’s “Movie Journal” column in the Village Voice and was anxious to start making movies, so he asked to meet Mekas for advice.

July 14, 1960: Mekas, his brother Adolfas and Barbara Stone are all arrested in Connecticut while scouting for locations for a film, mostly likely Guns of the Trees.

August 27, 1960: Mekas and Lew Allen arrange “another” meeting of “the Group.” (These meetings will eventually form into the New American Cinema Group. See Sept. 28 below.)

September 10, 1960: Again, Mekas makes mention of “the Group’s” meetings. (It’s just interesting to note that there were several meetings prior to the next pivotal one.)

September 28, 1960: At Lew Allen’s office at 165 W. 46th Street in New York City, “the Group” officially votes to declare itself the New American Cinema Group, based on a motion by Mekas. After the meeting, several of the Group meet at Emile de Antonio’s place to begin crafting their manifesto.

September 30, 1960: Mekas presents the first draft of the Group’s manifesto at a meeting at the Bleecker Street Cinema, which is owned by filmmaker Lionel Rogosin and managed by Adolfas Mekas. The manifesto is approved. Harold Humes writes a second manifesto, which is supported by Mekas. You can read the official manifesto as submitted by Mekas here.

January 7, 1961: The New American Cinema Group meets at 414 Park Avenue South and votes to establish a distribution center for their work. Amos Vogel opposes the action, saying that his Cinema 16 group should be the only distributor of independent films, but he is shouted down by Ron Rice after Mekas points out that Vogel refused to distribute Stan Brakhage‘s Anticipation of the Night. (The distribution center would eventually become the Film-makers’ Cooperative.)

Following Mekas’s diary entries is an article by Taylor Mead on his acting career, both on stage and screen. Mead doesn’t offer any major revelations like Mekas, but he does write in detail about acting in a 1961 film called Passion in a Seaside Slum, directed by Bob Chatterton, aka Robert Wade Chatterton. The book Alternative Projections: Experimental Film in Los Angeles, 1945-1980, notes that Mead’s collaborations with Chatterton are usually overlooked in the “official” history of underground film, but are essential to understanding the representation of homosexuality in avant-garde cinema.

Next, there is an interview with Shirley Clarke, who offers her personal recollections of the creation of the New American Cinema Group and the Film-makers’ Cooperative, as well as reflecting on her own filmmaking career. 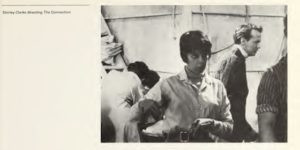 Following these personal remembrances, the catalog prints several articles on some of the specific films in the retrospective. The articles are:

The Savage Eye and Shadows by Jonathan Rosenbaum. (Rosenbaum later updated the article in 2010 and eventually put the revised version on his website.)
Pull My Daisy and The Queen of Sheba Meets the Atom Man by J. Hoberman (Hoberman and Rosenbaum were collaborating on the book Midnight Movies at the time these articles were written.)
Nothing But a Man and The Cool World by Noel Carroll
Babo 73, Hold Me While I’m Naked and Hallelujah the Hills by Richard Peterson
Come Back, Africa and The Brig by James Roy MacBean
David Holzman’s Diary and Portrait of Jason by Wanda Bershen

The catalog then gives a partial filmography of important films in the underground, foreign and Hollywood scenes from 1958-1967; and lists important political and social events going on at the time these films were made. There’s also filmographies of the filmmakers in the retrospective; as well as a bibliography of books and publication articles on underground film.

Lastly, there is the full program of films in the retrospective:

Gallery of Select Photos in the Catalog: 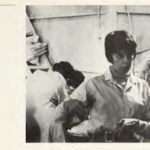 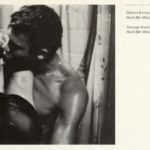 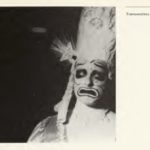 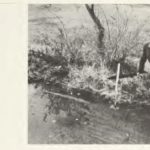