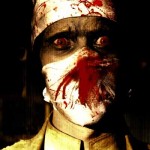 If you’re tired of the usual slicing and dicing serial killers or have gotten just plain bored with the oversaturation of the living dead, here’s a severed handful of quirky horror flicks to make for a wickedly entertaining Halloween.

This year, it’s time for your Halloween to be a little bit stranger than ever.

The Vampire’s Tomb, dir. Andre Perkowski. Nobody makes an Ed Wood movie better than Ed Wood … with possibly the exception of Andre Perkowski. It’s a dark and stormy night when a family gathers for the reading of their dearly departed aunt’s will. But has the deceased returned from the grave to exact a grim revenge? Actually, not much is “grim” in this spoofy realization by Perkowski of an abandoned Wood project. (Available on: Amazon)

Gut, dir. Elias. Why the hell do we watch horror movies, anyway? Single-named director Elias analyzes the impulses and effects of watching the grotesque in this horrific drama of two male co-workers who become obsessed with a video in which a woman is disemboweled by an unseen killer. One man’s idyllic suburban life goes to hell while his introverted compadre comes out of his shell for all the wrong reasons. (Available on: Amazon | iTunes)

Spine Tingler! The William Castle Story, dir. Jeffrey Schwarz. Horror film producer William Castle is most famously known for the oddball gimmicks he invented for primitive attempts at audience interactivity, e.g. “spine tingling” theater seats, skeletons flying overhead, et. al. But here Schwarz crafts a highly intimate and touching portrait of the man behind the horror. Watch Spine Tingler!, then stream one of Castle’s films like The Tingler or Straight-Jacket and see just how scary they hold up as being, even without the goofy gimmicks. (Available on: Vimeo)

A Nocturne, dir. Bill Mousoulis. If you’ve been worn down by the romantic and sparkly vampires out there, director Bill Mousoulis instead explores the utter mundanity of the lives of the living dead and other creeps that haunt the night. These bloodsuckers chill out in the excessive ennui of their existence experienced between their barbaric neck-chompings. A Nocturne is an elliptical and mysterious journey into back alley horror. (Available on: Amazon)

Bane, dir. James Eaves. Ok, the Underground Film Journal has been hyping James Eaves’s Bane for a while, but it’s streaming in a variety of formats now that make it ripe for revisiting, especially for those yet to experience it’s icky joys. Eaves has concocted a disorientingly good time with this mind trip of a torture session for four pretty young women being held captive for a science experiment that involves a bloodthirsty butcher carving the time of their deaths into their flesh. (Available on: Amazon )